I went out on the hunt for Pollock on the 18th of August. I set out just as the sun was rising before 6 am. I have found early morning or later evening my most successful times to fish for Pollock here around Whitley Bay.

The sea was still choppy from the SE blow the day before (which was also forecast again later in the day). I love being out early (once I have managed to get out of bed).

I headed straight for the kelp beds that cover most of the bay around the lighthouse area and picked up a small cod very quickly. This fell to a weedless shad.

After that I tried a variety of techniques and struggled to find anything for about 2 hours. Jellyworms, Fiiish Minnows and Artic Eels, jigged, trolled and cast and retrieved. Nothing was happening. The wind was starting to pick up as forecast and things were not looking too hopeful. I had orders to bring home some tea as well!

By this point I had drifted along to Seaton Sluice and decided to work my way back. I trolled most of the way and tried a number of drop offs I have marked and finally got some Pollock action.

This one fell to a jelly worm rigged weedless:

This was a better fish that gave a good account caught on a white HTO Artic Eel cast and retrieved:

This one was the biggest of the session and fell to the same lure as above. It fought very hard and made the session all worth while. This one had tea sorted:

On the way back I lifted up a pot I had put down a couple of days ago. I had a lobster in it but it was undersized so back it went but not before a quick photo:

I’ll hopefully fit in a few more Pollock sessions before the murky waters return and the cod goggles come on.

I managed a mornings session yesterday (24/7/15) before the weather turned. Forecast was for very light winds and with little swell for a few days clarity was also going to be good. The clarity part was right and for the most part the wind was light although it kicked up quite a bit towards the end. The wind always seems to make an appearance these days.

I couldn’t resist a couple of pictures of the light house before launch given how nice the conditions where. 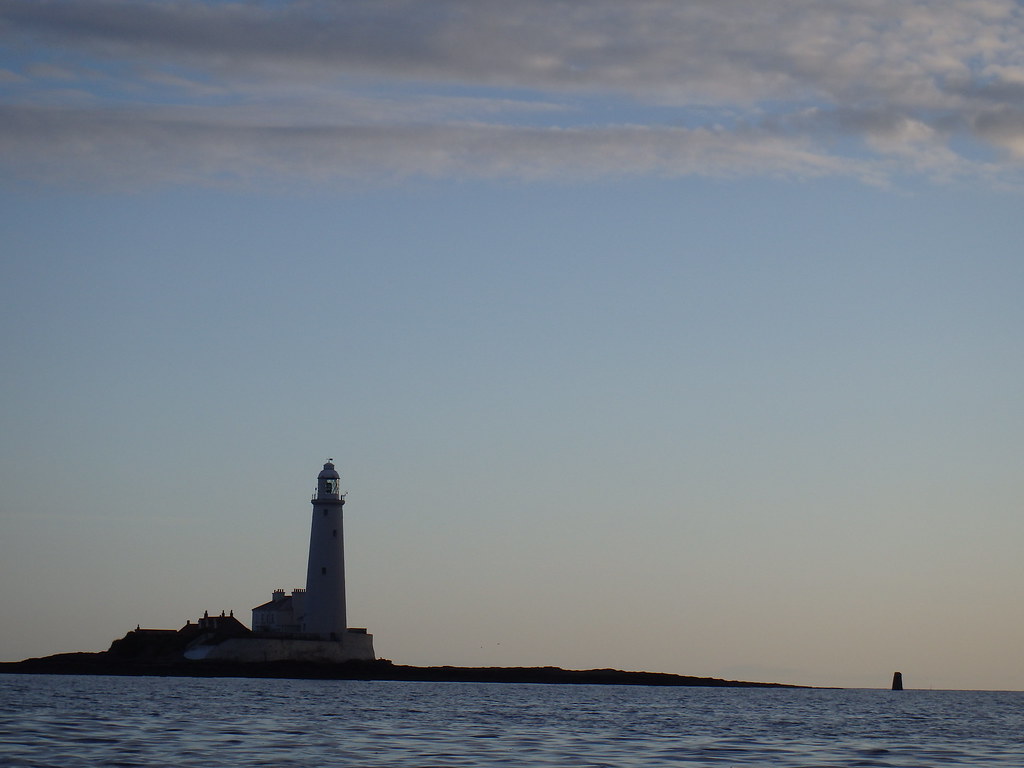 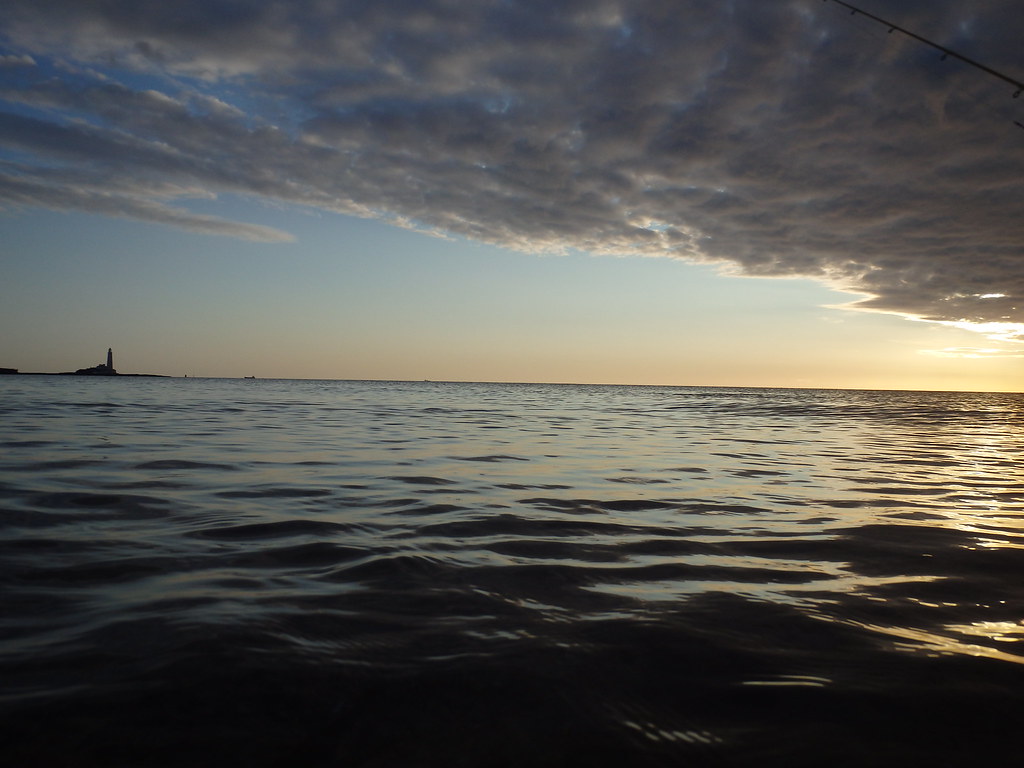 My plan was to get some paddle fitness in and mix it up a little and go for different species. I’ve not tried this specifically before but I’ve been spurred on by the great pics of the Oxwich species comp. I initially planned to paddle the couple of miles or so straight up the coast to the sand bars at Seaton in search of flatties. I haven’t targeted these at all this year but really enjoy eating them!

On approach to the light house I could hear the barking and roaring of the seals. The island is teeming with them at the moment including a lot of pups. I know some find them a pest but I personally love seeing them (as long as they do not get too close!). It must be a sign of good fish stocks but it cannot help fishing when they are only a few feet away! 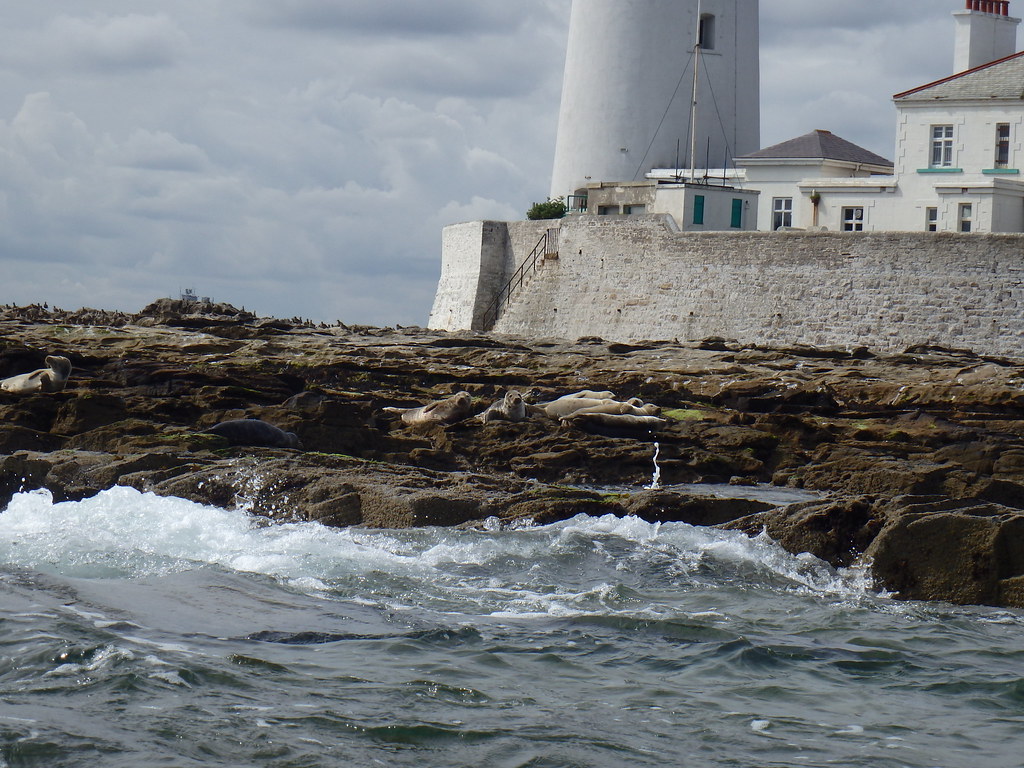 This area screams Pollock and temptation of starting fishing before the flatty ground got the better of me. A quick cast out into a favourite spot of mine and bam, straight in! Not a Pollock though but a nice Ballan Wrasse which fell to a 12g Black Fiiish Minnow. 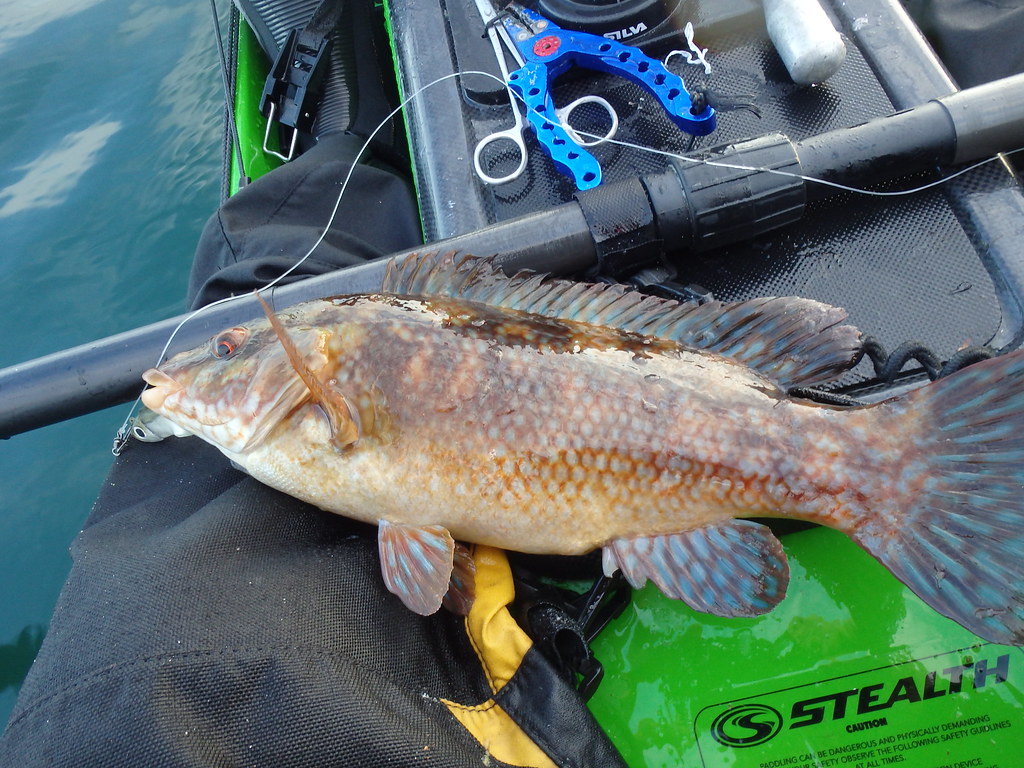 1 species down. I had a couple more casts but then managed to get back to the plan and continued to paddle to Seaton Sluice (but trolling a lure in case a hungry Pollock was about).

On arrival to Seaton Sluice it took me a little while to find a nice sand bar and then I set about drifting spoon rigs. One had black lug tipped with squid, the other a white XL Isome Worm. I was keen to see how they compared. The flatties were very obliging. Nothing big enough for tea but half a dozen caught (mostly dabs with the 2 plaice) before thoughts of rough ground started. 2 fell to Isome worms. 4 to black lug. I also caught a couple of mackerel which took it to 4 species. 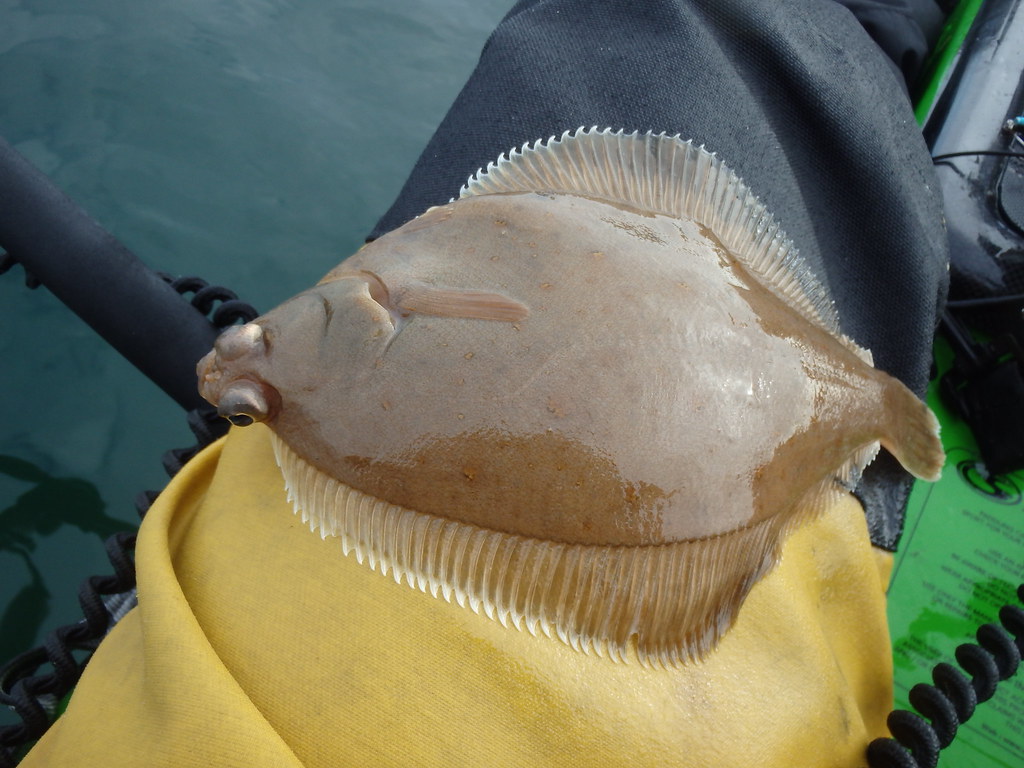 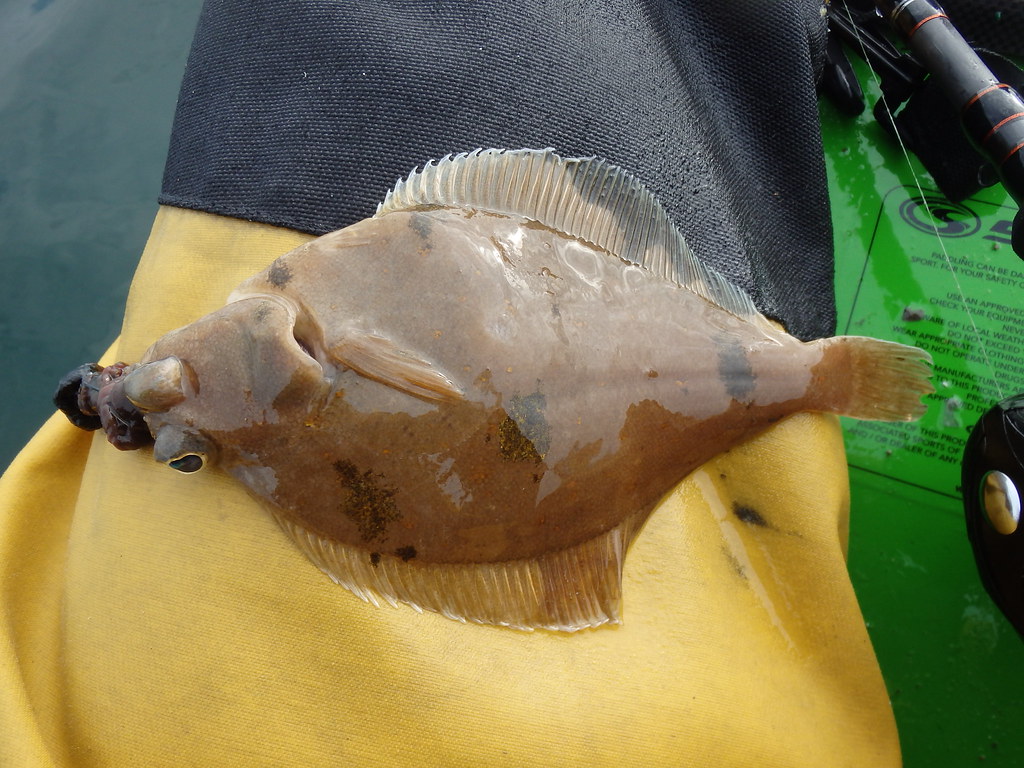 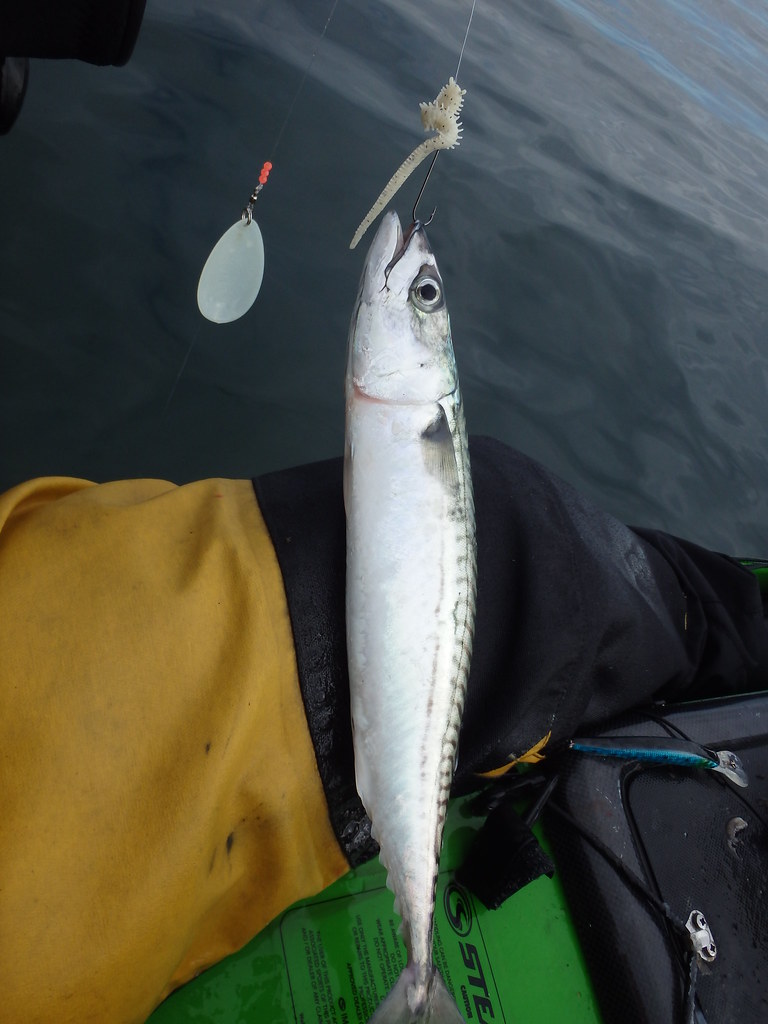 I then paddled to some ground near Hollywell Bay that grabbed my attention on the paddle across to Seaton Sluice. First drop with an inline 4” slug go and bang! A good cod of about 4lb came to the surface after a good fight on light gear. This action continued for about half an hour with a cod a drop. Some were pretty small but good fish were amongst them. I also tried the HTO Artic Eel for the first time in rhubarb and custard. This is a weedless lure similar to the Fiiish Black Minnow but slightly cheaper and has a built in rattle. In addition, it is longer and thinner with the hook running further along the body. They worked very well for me for cod and pollock and I look forward to using them again (see vid). 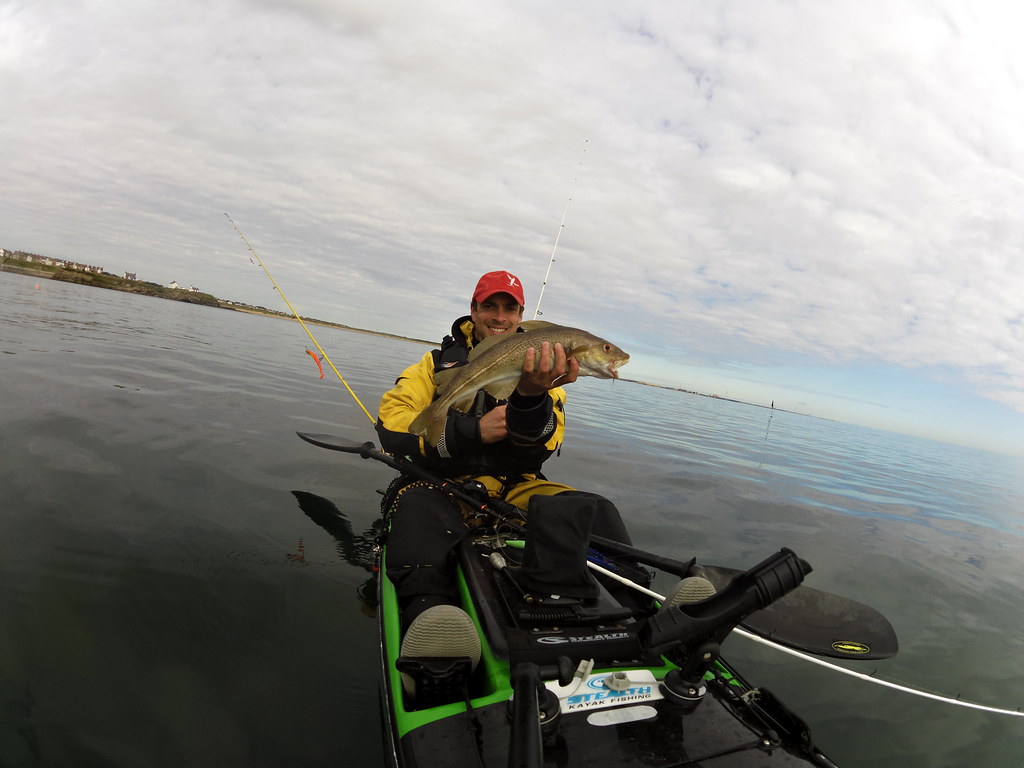 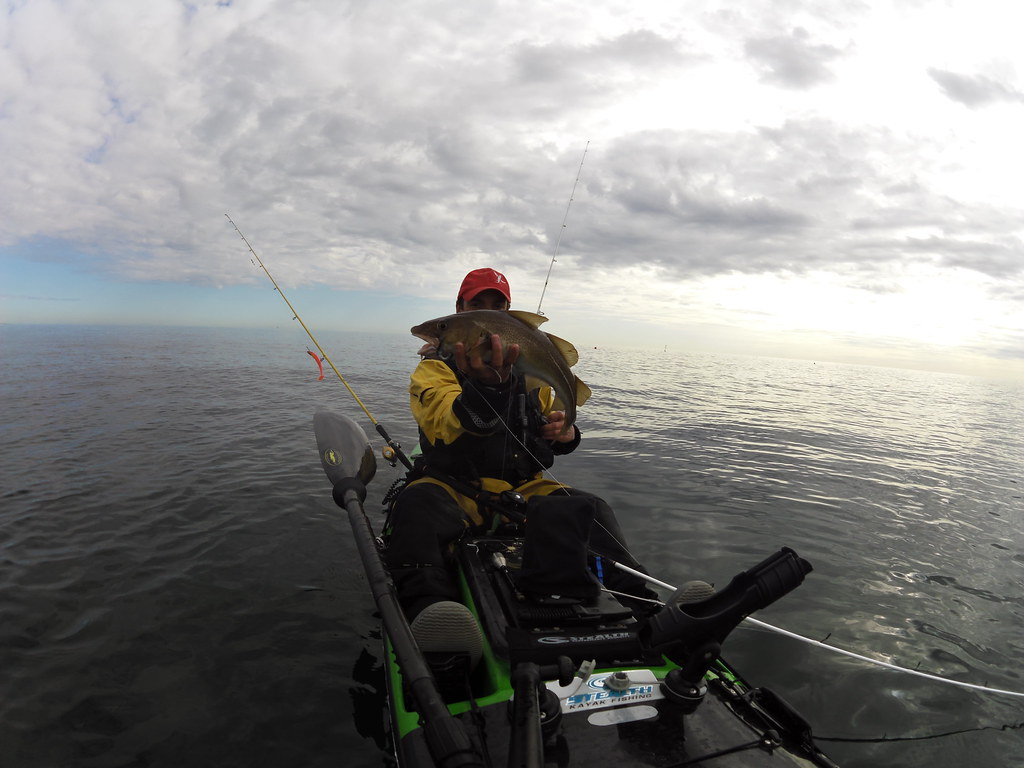 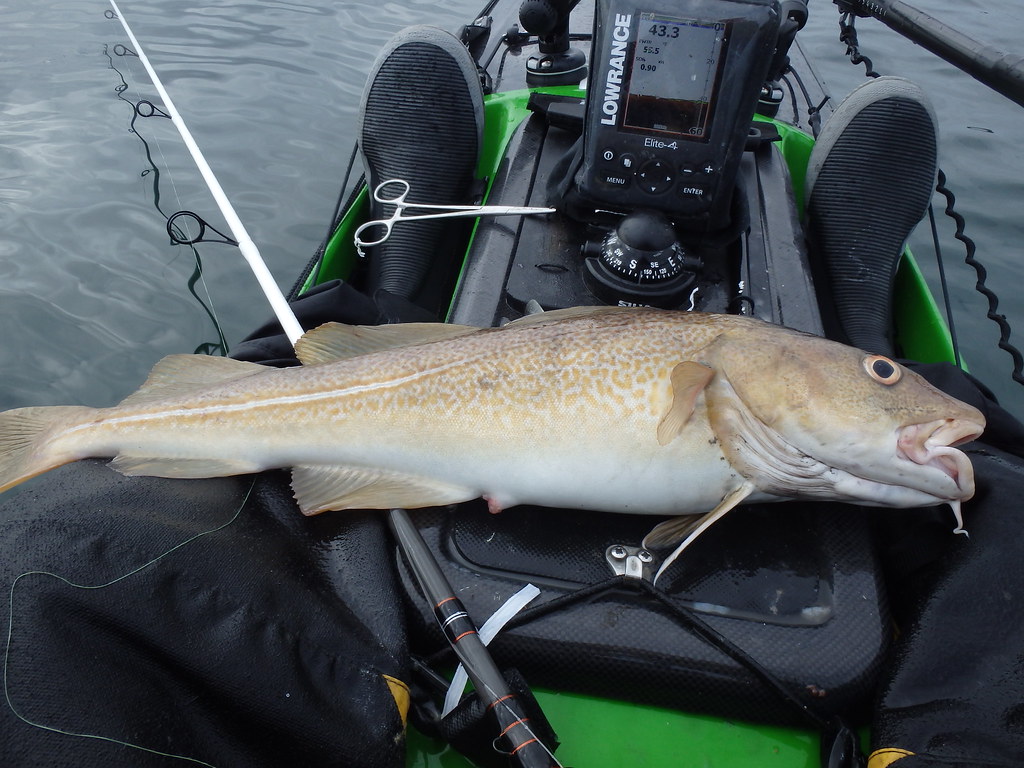 On the drift back towards the light house I had a couple of surprise hits. Two pouting / scotch haddock fell to my lures. I have caught these around yellow can off Whitley Bay before but not in this area. They were also PB’s for me. One had thick brown bands running down its body. The other was solid brown with no bandings. Are these the same species or can I add another one to my list? Any info appreciated. 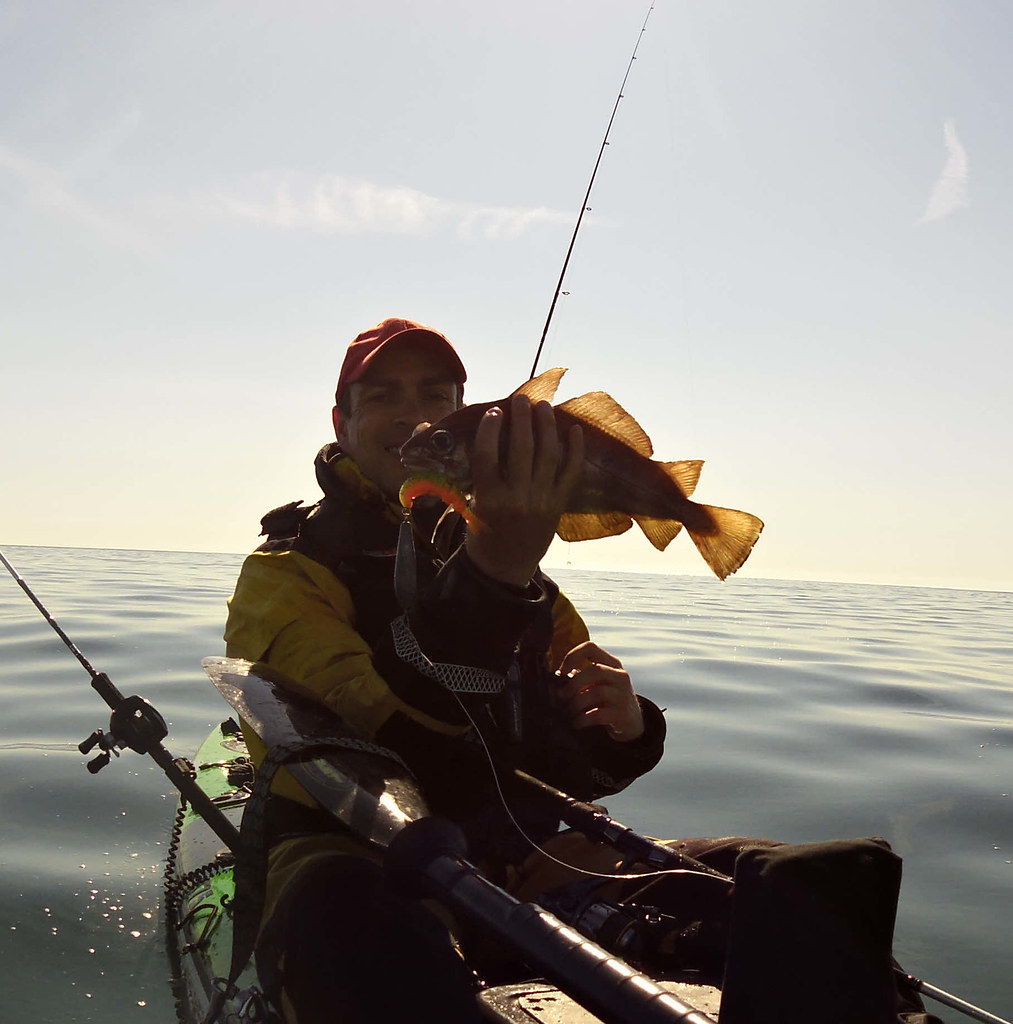 Dark / brown Pouting (double hook up with a good cod!): 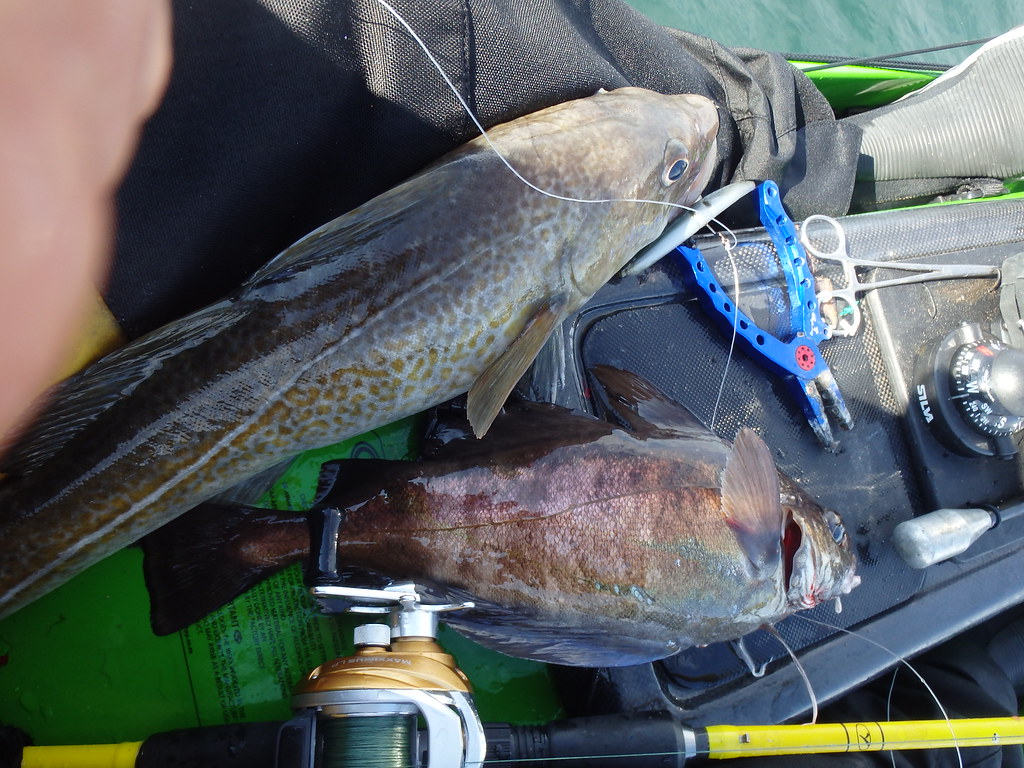 With 6 species under my belt I wanted a Pollock. These had been a little thin on the ground over the last few sessions with only 1 or 2 being caught after quite a bit of effort so I wasn’t sure how this was going to pan out. Fortunately, luck was with me today. I switched to a more natural HTO Artic eel colour (the “Grippan”) and paddled to some thick kelp beds that I have had luck in before. I didn’t have to wait long before I was in with a good size Pollock. I love these fish and cannot get enough of the fight they give. 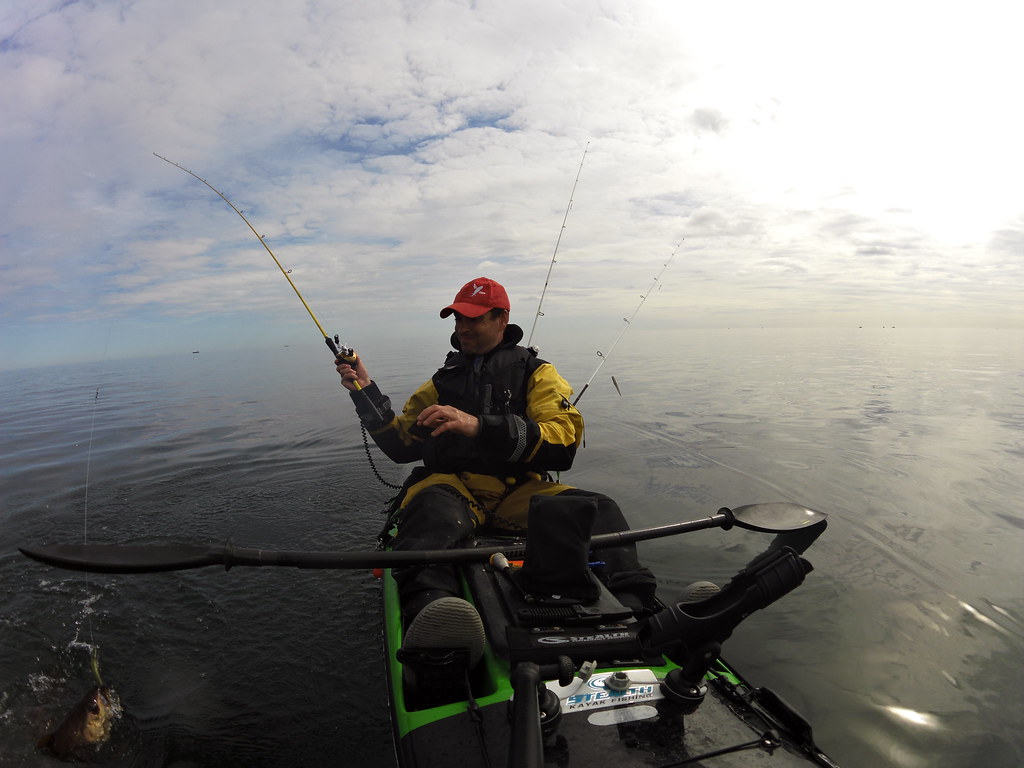 A good start to the Pollock fishing: 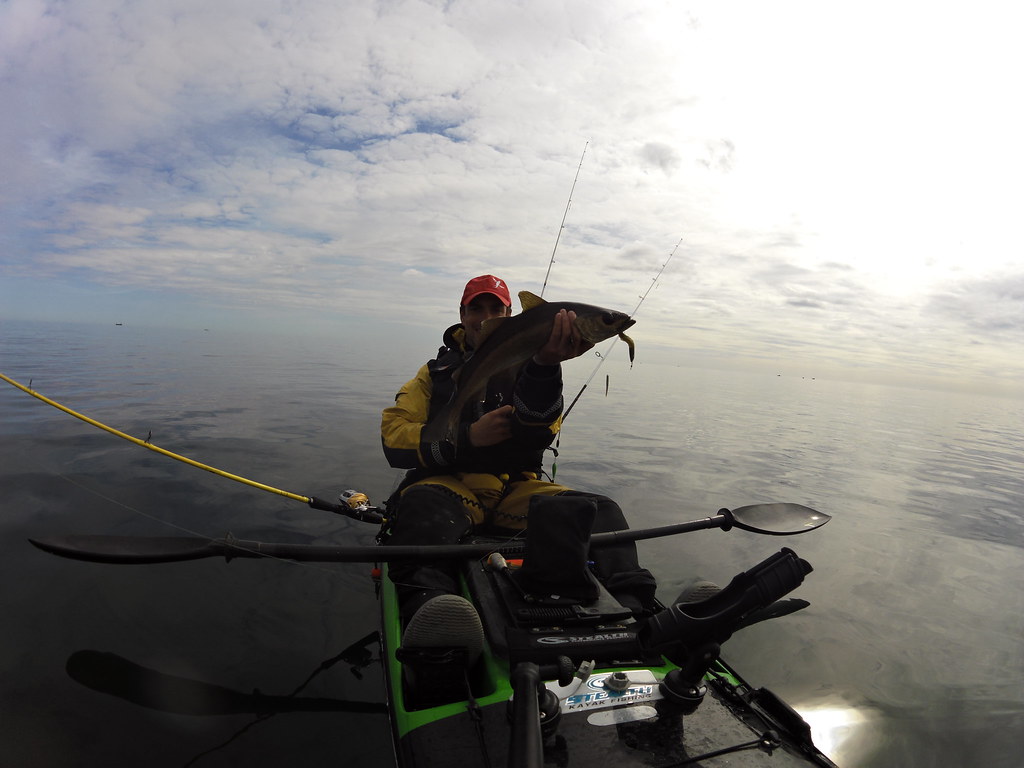 There were a lot. On almost every drop or cast and retrieve you could see one following the lure on the fish finder. 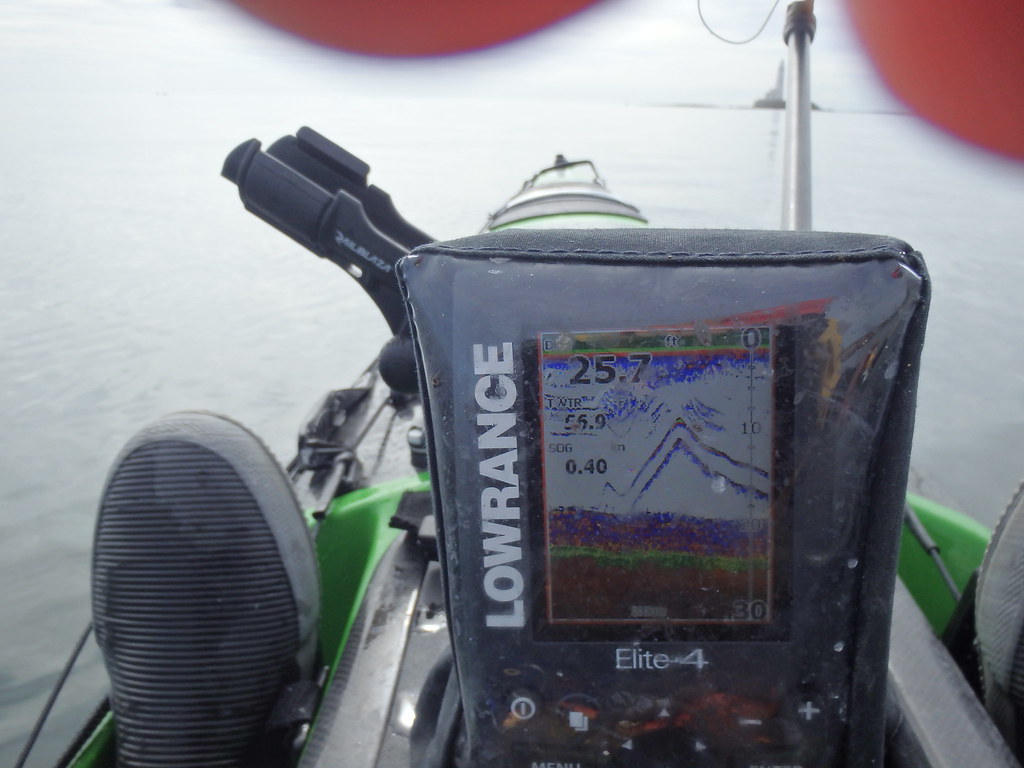 A lot of big smiles and grins from ear to ear followed as 3 more came to the yak but none bigger than the first. 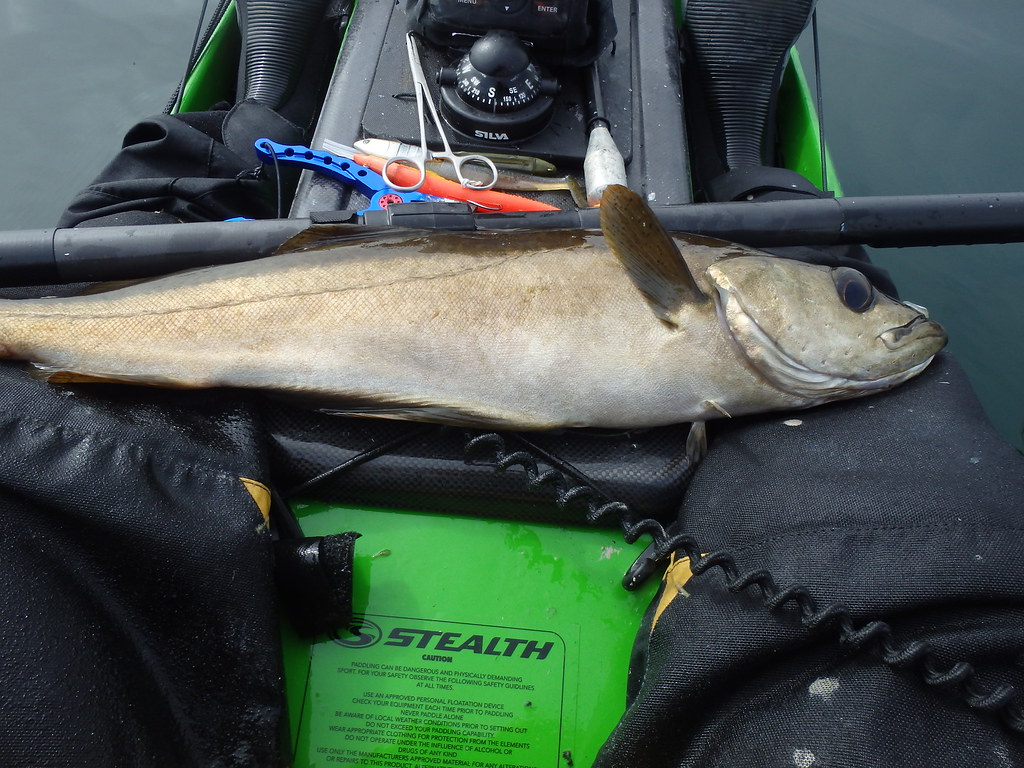 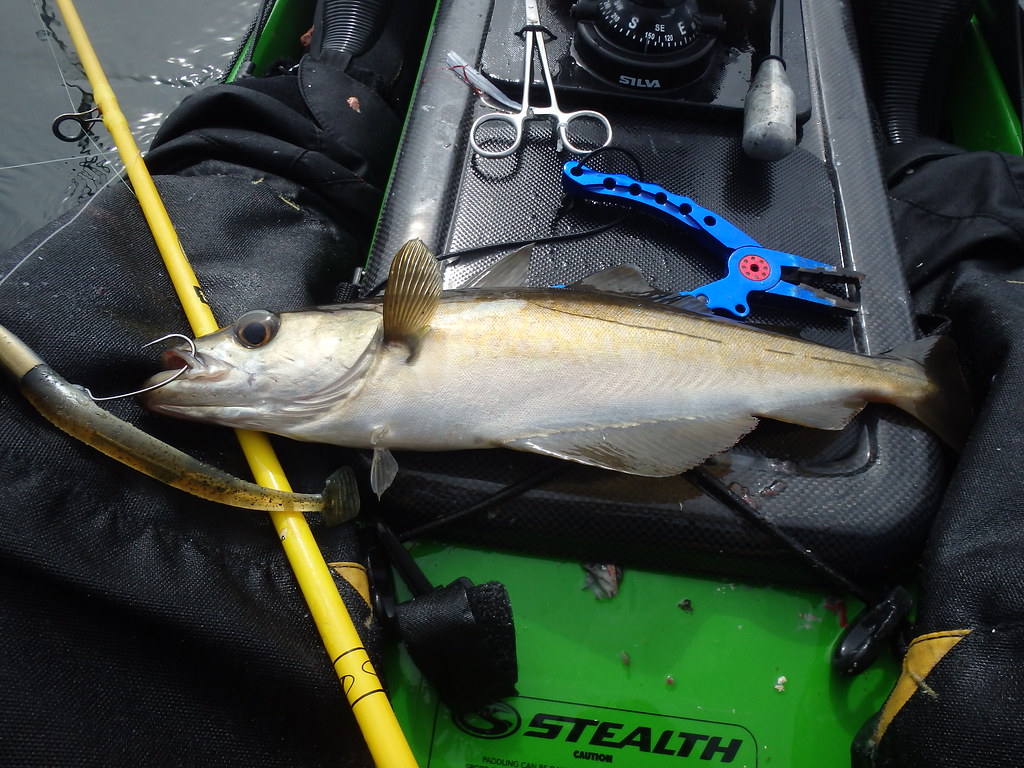 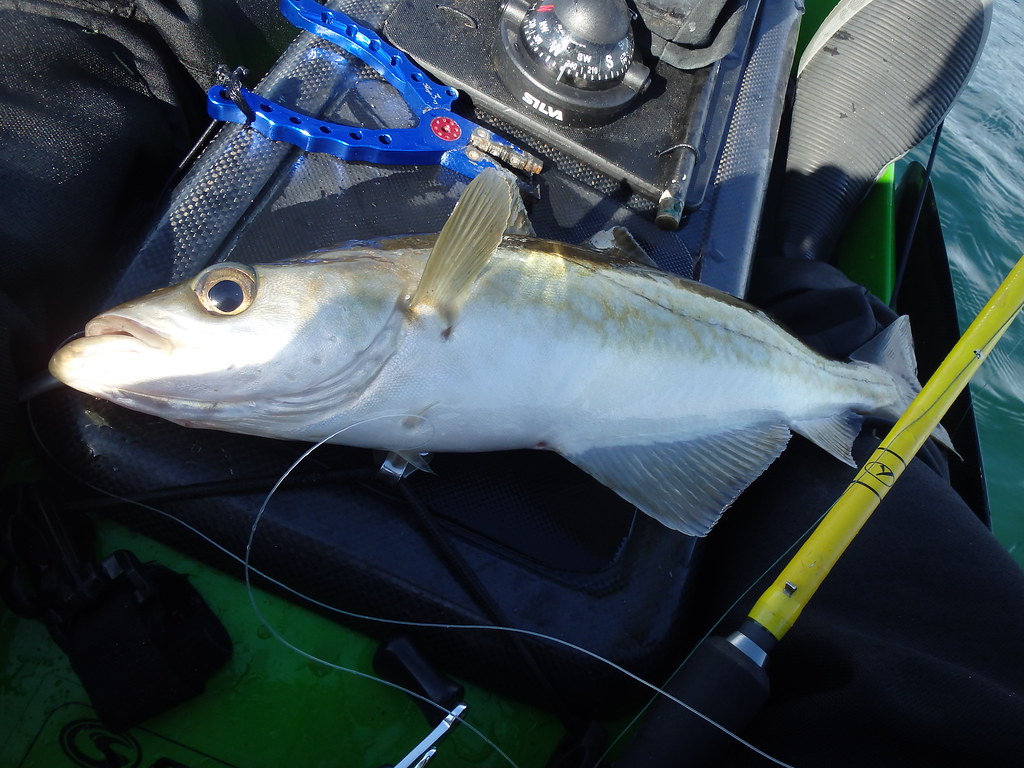 7 species done and it was time to head home. That fix will keep me going for a while. What a great hobby of ours Kayak Fishing is.

A video for those with a spare 5 minutes: