Dave, myself and Mark headed out at Blyth at 5:30 am on the 23rd. The conditions were lovely. We paddled a mile or so out and Dave got a good fish within minutes. Things were looking up.

Mark then got himself a good cod and a ling (both around the 6lb mark). We also had the pleasure of seeing a pod of dolphins being very active and breaching on regular occasions. Unfortunately they were a good 100 m away so it was hard to get some good footage but I’ve created a very short video to give you an idea. They really are magnificent creatures.

We moved on a few times and I was still unable to make a hook up. My blank was saved by a tiny pouting which took a jellyworm longer than the fish itself. Still, a fish is a fish! Shortly following on from this I hooked into a much better fish and up came a ~ 7 lb cod which gave a good account of itself. This took one of the 90g 160mm Fiiish Minnows. This proved to be my lucky lure as about 30 minutes later the same rod lurched over and a really heavy weight was felt at the end. Initially I thought I was snagged but then the tell tell head shaking signs followed and after quite a while a lunker of a cod came to the surface. This was my biggest cod to date at just over 12 lb. I was over the moon.

Top session in lovely conditions with great company. The fishing was hard going but the fish that were caught were real specimens.

My first cod of approximately 7lb:

Released to get bigger:

A few of these about:

Another pic of the 12lb (taken by Dave):

Sea state doesn’t get much better than this. Mark and Dave on the paddle back in:

Short video of the dolphins breaching in the distance:

I got out for just for a very quick fish on Thursday. I only had a couple of hours free but it was the first day of the summer holidays and I was super keen. The wind was a bit of a pain. Nothing major but enough to make the drift faster than I like with light lures. I paddled straight to St Mary’s lighthouse and Whitley Bay and fished from there up to Seaton Sluice. In just a couple of hours I had 8 fish. These were a mixture of cod, pollock and coalfish with pollock making up the bulk of fish.

I had always read to not stop the steady retrieve when fishing for pollock until the lure reaches the surface. Up until this session I’ve never had a super late take but on this occasion I had 2 takes in the last foot of water. This was thrilling! The fish weren’t huge but such a late take followed by the express train dive in 20 ft of water kept me very entertained.

The red tinge of a resident kelp cod (spot the seal cruising underneath me on the finder! Plenty to keep the fish in hiding around here unfortunately):

Followed by a smaller one:

The average stamp of Pollock I caught:

This one taking a slug go:

Whitley Bay is a fantastic all round kayak fishing location. It has a lot of varied terrain offering quite a few species in close proximity to each other. It is also relatively sheltered as a lot of the large swell gets blocked by the outer reef allowing for an easy paddle out (particularly at mid tide) when other spots such as Tynemouth would be hard work.

The bay is shallow until you get to the outer reef whereby it drops away quite quickly. Most of the ground is rocky making it an excellent spot for cod fishing. Around the light house area there are large drop off’s and there is always a good chance of a pollock and wrasse. Further North of the Island there is some large kelp beds which are also worth a look at. It is rumoured that bass can be caught here on the inside reef but I’m yet to get one.

Further out towards yellow can (a marker approximately 1 mile out to sea) you will find more rough ground in approximately 60ft of water. This is again, cod country and if you are adventurous, there are a few wrecks not too far from there that are worth checking out.

Whitley Bay is one of my favourite areas to kayak fish from and has produced good size fish for me with cod and pollock both over 10lb fairly close to the shore.

Whitley Bay offers a few different options when it comes to launching the kayak.

This is a very easy spot to launch from at high tide. You can wheel the kayak down the road right into the water. At low tide it can be a bit of a pain getting the kayak up over the raised road but it is do-able (especially if there are two of you). The parking is not free though and at time of writing is £1.20 per hour which is a downside.

This is probably the most popular access point amongst local kayak fisherman. People park opposite the small golf club car park and walk across the dual carriageway. Parking here is free (note: the golf car park is not). The access is OK going down but it is steep. Going back up is a killer. It is only a short walk but the steepness can really test you. Especially if you are carry the extra weight of a good catch!

Access Point: Path from the car park at Whitley Bay

View from the road of the foot path that can be used to launch.

This is the spot that I launch from quite frequently as it is close to home. You can park in the large pay and display car park directly above the foot path and walk the kayak down. It is a good spot if you want access to the middle of the bay. The only problem is the last 10m stretch as this is over uneven rocks and pebbles.

Access Point: Easy ramp down to the middle of Whitley Bay beach

A view from the top of the concrete slip. This is a very easy launch.

This is the easiest access to the middle of the bay and is just slightly south of access point 3. The concrete ramp is wide and runs straight to the beach. It isn’t too steep either and is in quite good condition. The only problem is the distance to get to it as you will most likely still need to park at the large car park.

Early on in the week Friday looked do-able. Not great and most likely raining, but do-able. I started getting excited as the forecast was holding. This was dashed on the Thursday night when xcweather (along with other forecast sites) updated to show strong S winds around midday. What an ar*e I thought.

I woke up Friday to pouring rain and winds. DIY on the house kept me pre-occupied. However, around midday the rain stopped and weirdly the wind did not build. In fact, quite the opposite. It was dead calm. I quickly rigged up and set out at Whitley Bay to the mark that produced my PB 5 days prior except it was a low tide and only 20-25ft. Would it produce again for me?

The swell was 2-3 ft and confused when I started but forecast to build so was one to keep an eye on.

All set up and ready to go: 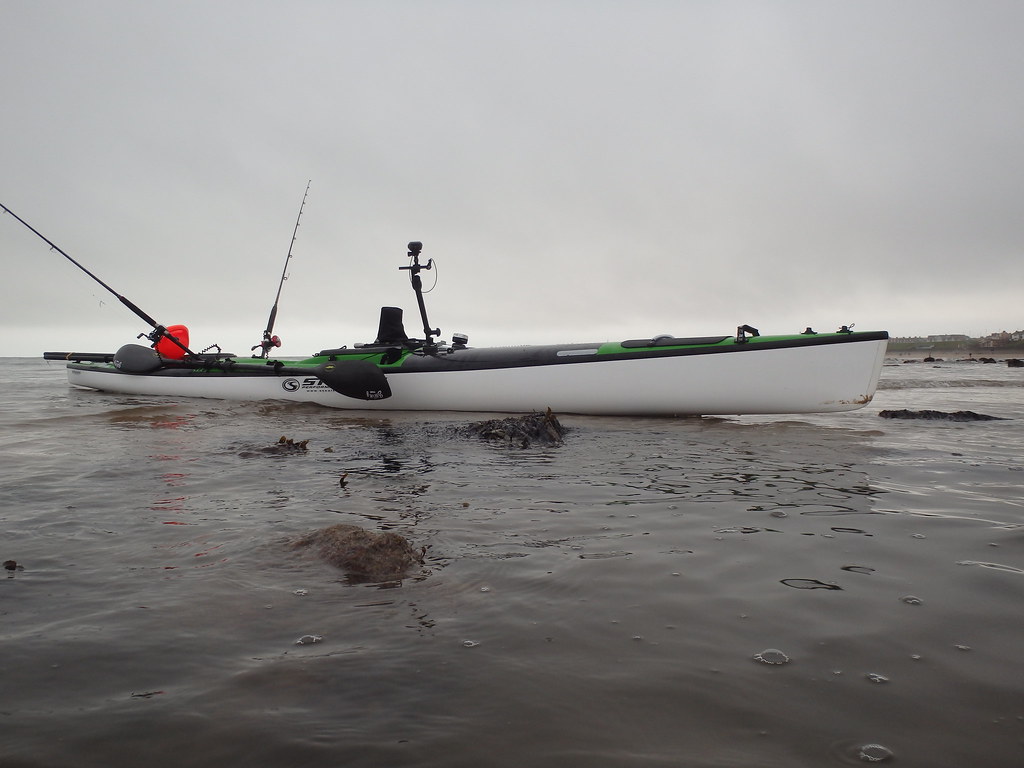 Fishing was again, very good. All fish were taken on black lug tipped with squid. To start with I was plagued by pouting after pouting. They aren’t shy of taking big baits on big hooks! I then had a 3-4lb cod. That was better I thought. Now can I find any others?

A couple of snaps of at least half a dozen pouting: 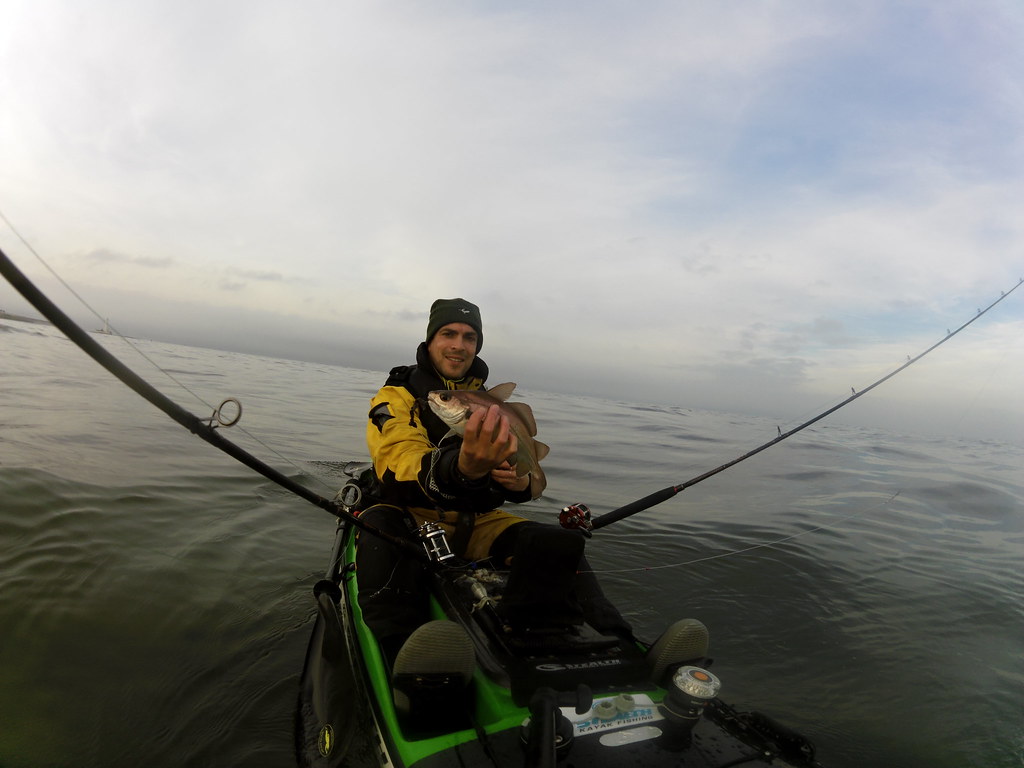 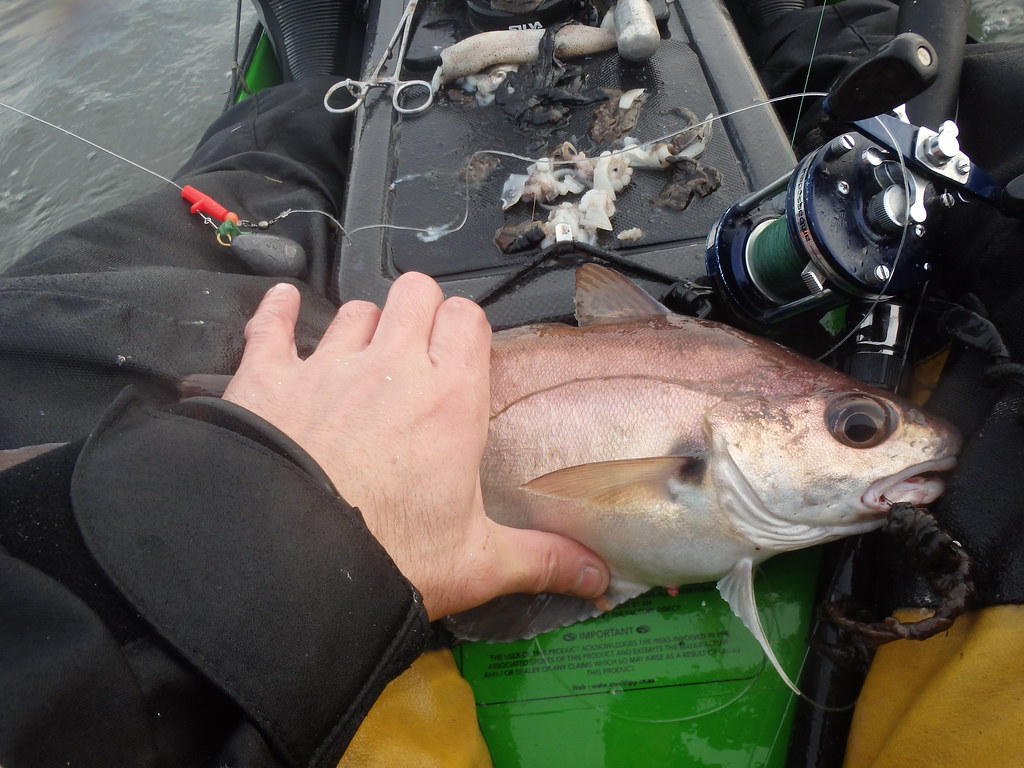 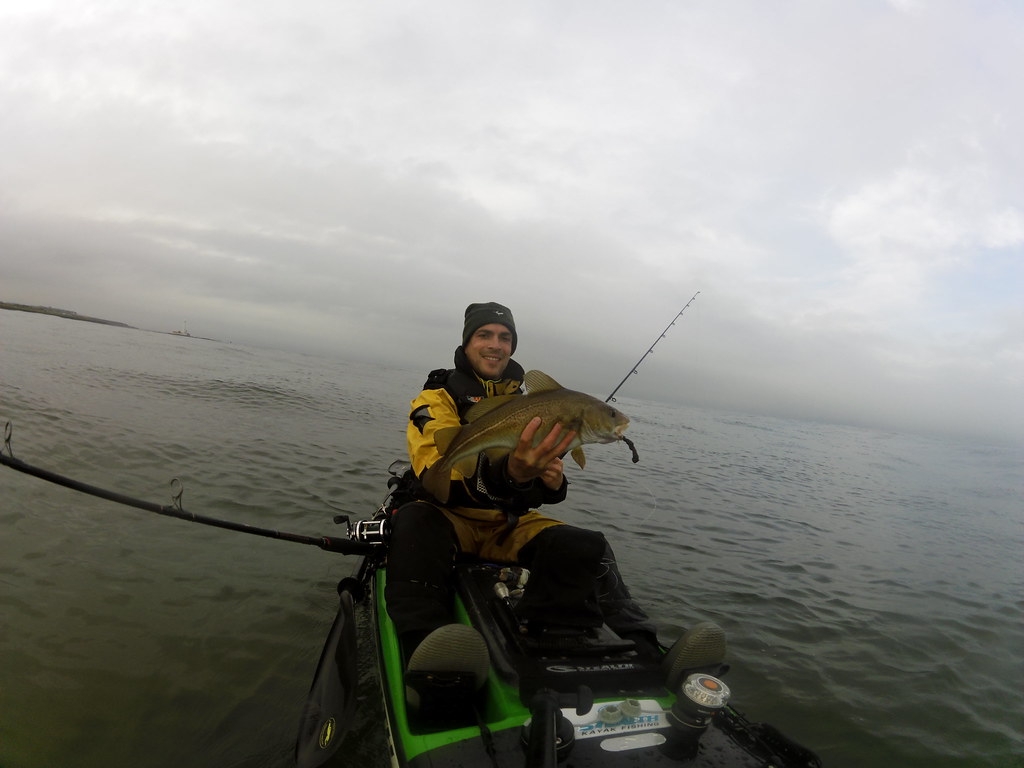 I started ground baiting again and the cod kept coming. I then had a massive take on the 12-20lb rod. Violent head shakes taking line from the reel. It had all the hallmarks of a good cod. It lasted all of 5 seconds before the hook pulled out. Gutted!

The short lived fight on the ‘one that got away’.  The face and tilting kayak says it all.  There was a lot of power there….: 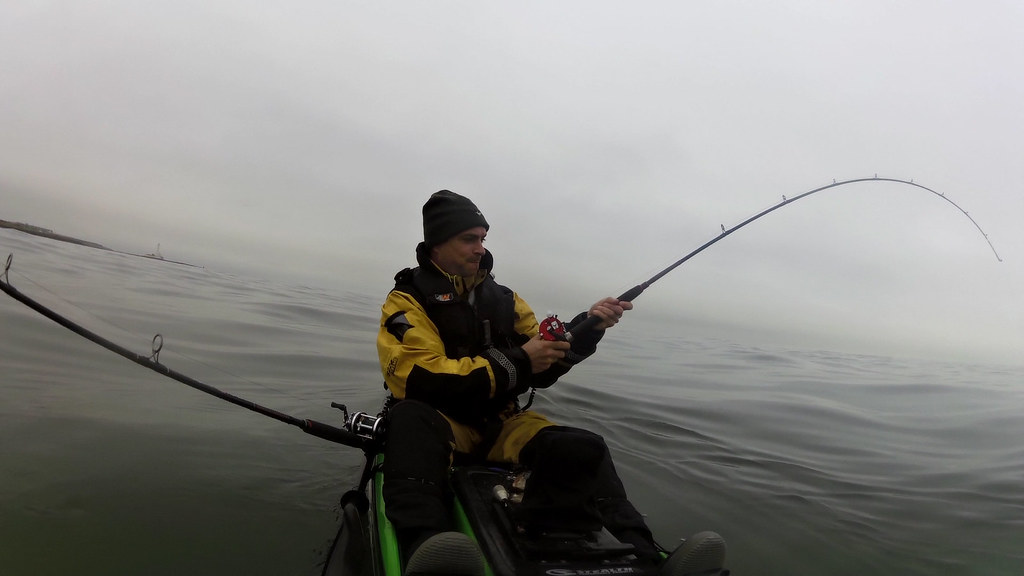 I re-baited and put the rig straight back over the spot. I didn’t have to wait long. Bam! Fish on. It felt of similar proportion and it didn’t get away. In my rush to get out I forgot my scales so no real idea of size. 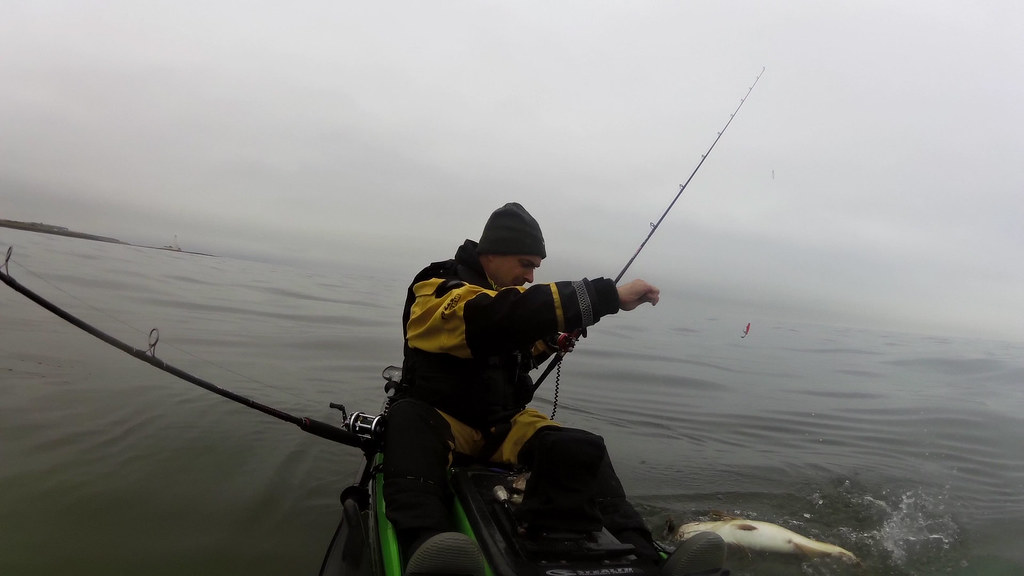 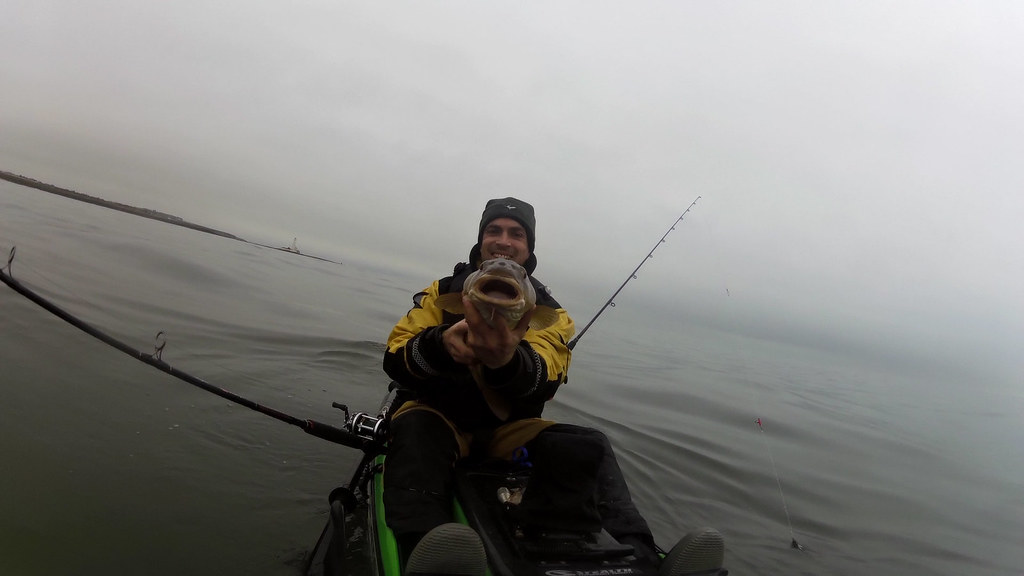 What a beauty.  The fish finder shows you the mark  ::) 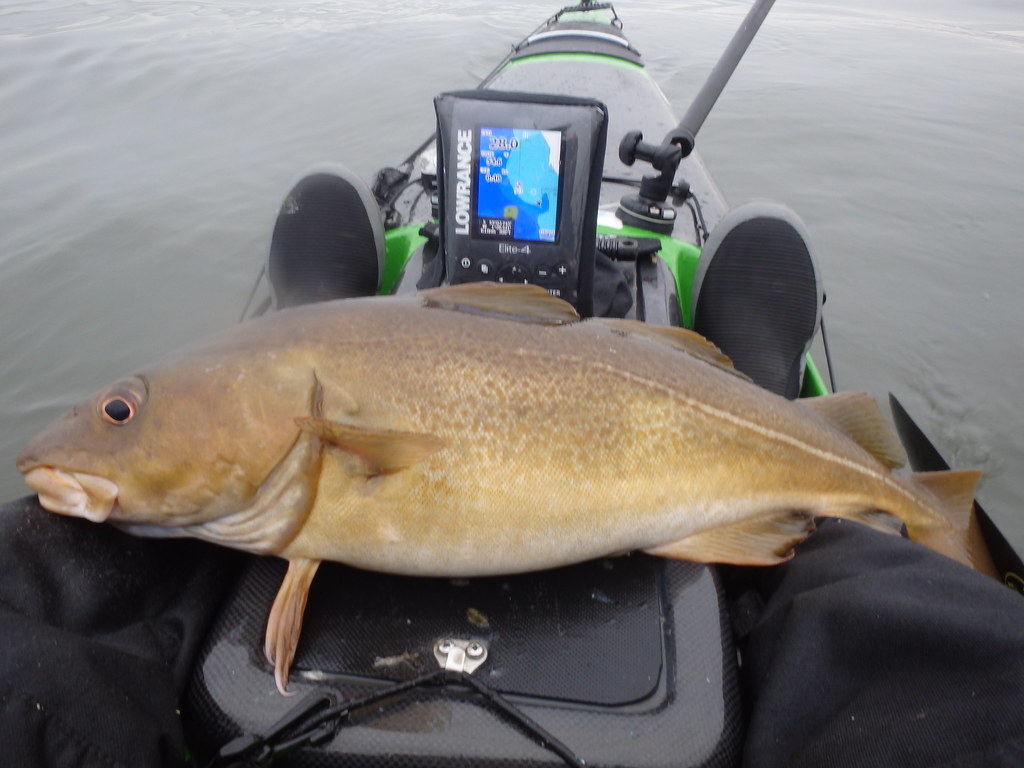 More cod followed but not as big. I then had take on my 6-12lb rod. This was different though. It kept crash diving to the bottom. It felt like a pollock but I’ve never had one take static bait off the bottom before. On surfacing, my suspicions where confirmed. It was a good pollock of approximately 5-6lb. 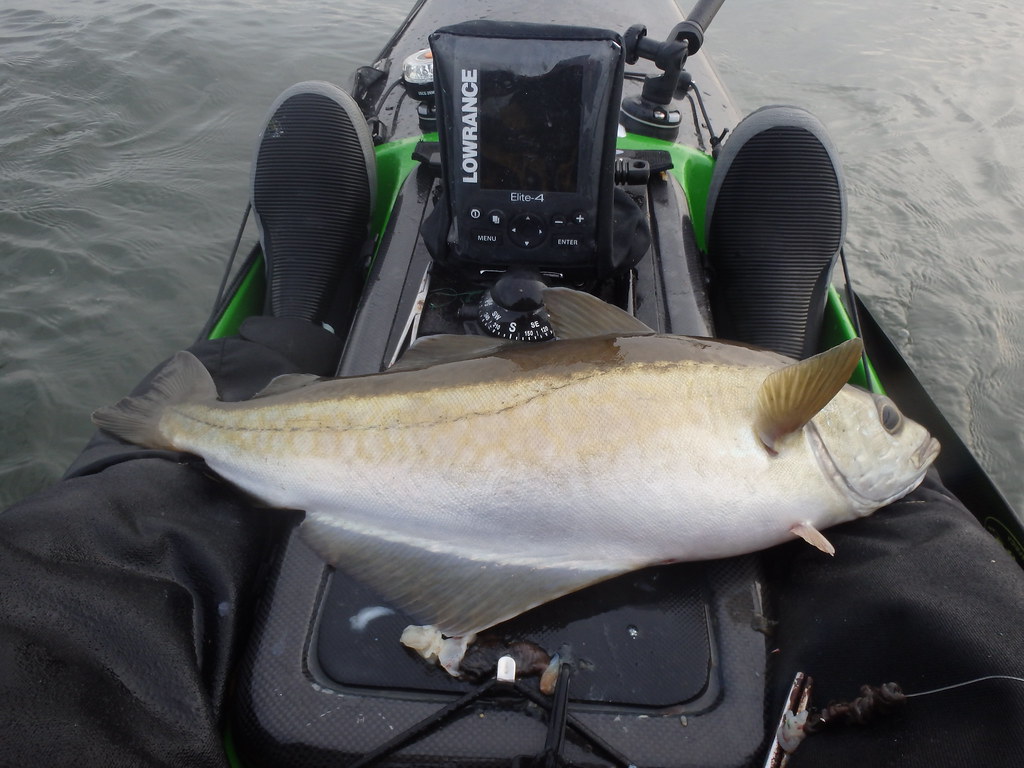 I had been out about 2 hours and the swell was building quickly so decided to head back in. The tide had risen and there was quite a shore break which made the paddle in interesting 🙂

I created a 3 minute video of the trip:

Forecast looks mint for tomorrow. I’ve committed to keeping my father in law company on his boat but will be keen to hear how others get on in the area as it seems there is a really good stamp of fish about at the minute.