I’ve been experimenting with the best ways for me to target Pollock (and now red kelp cod) from the thickest and extremely snaggy kelp beds found on most shorelines but in my case Whitley Bay, Cambois, Newbiggin, Embleton and most recently Eyemouth in Scotland.

This experimentation started at the beginning of last year after wanting to catch more and more pollock and losing more and more rigs to the kelp forests. With conventional shads and jig heads with exposed hooks it seemed it was only a matter of time before I lost the rig much to my frustration.

In addition, I was having a lot of success trolling deep diving lures. At approx 1.5 – 2 knots paddle speed the lure was diving to around 10ft which got regular hits in 20-25 ft of water with kelp beds. However, a sudden shallowing in terrain would result in one of the 2 sets of trebles getting snagged. A lot of the time these were lost.

Deep Diving Lures:
Firstly I removed the trebles for single hooks. These are in line single hooks so they are presented correctly. The decoy plugin ones work well (https://www.veals.co.uk/acatalog/decoy-pluggin-singles-3537.html). These have micro barbs and reduce snagging significantly and are so much kinder to the fish. Before, treble hooks could leave the fish in a right mess with front hooks in the mouth and rear in the body. This is far less likely with the single hooks and they are so much easier to remove. I have not noticed less hook ups and the pros far out weight the cons in my opinion.
Secondly I’ve become much better at monitoring the fish finder whilst trolling. With practice I’ve managed to control my speed to bring the lure up closer to the surface whilst travelling over shallower ground.
Thirdly, I’ve found adding a ‘teaser’ fly approximately 2ft before the deep diving lure deadly. More often that not the Pollock have grabed the teaser rather than the larger lure.

Picture of the set up: 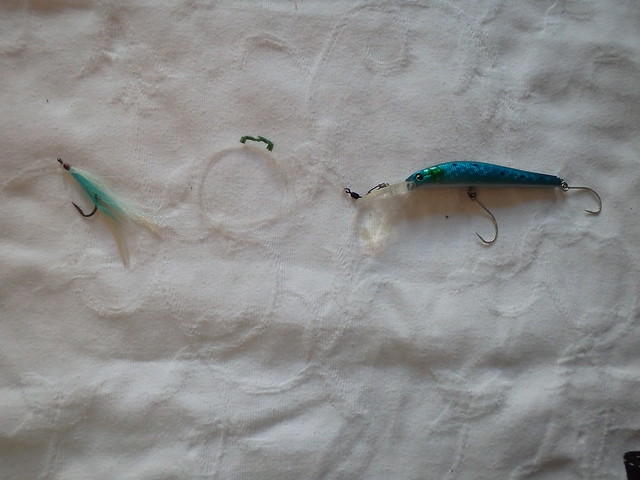 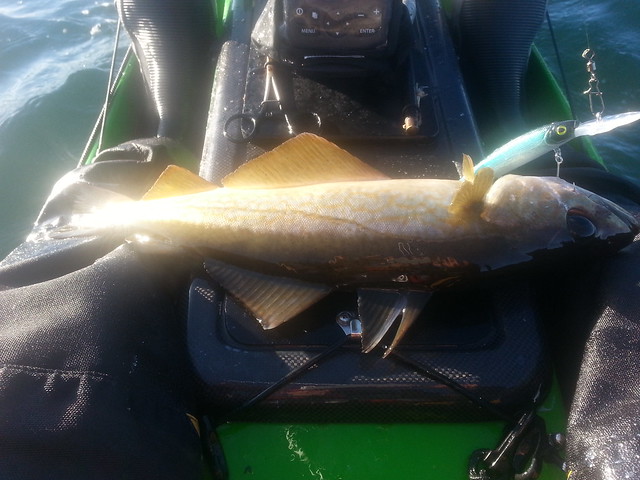 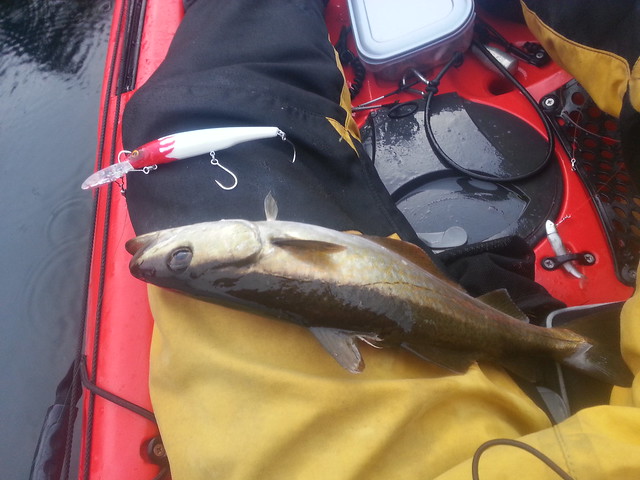 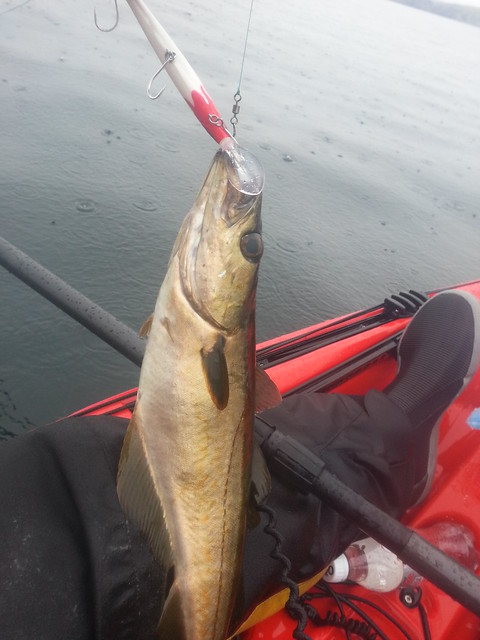 Weedless Jelly Worm Rig:
This has become my go to rig for Pollock and it will take the occasional cod. I’e had a lot of success with this rig and I can fish it right through the deepest of kelp beds and rarely get snagged. If it does snag a little it almost always pulls through when tugging from a few different directions. I have a bullet lead on a short sliding trace of about 1-1.5ft. I vary the bullet weight depending on what depth I’m wanting to fish at. I then have a flowing trace of 3-4ft with a weedless hook which I attach to a jelly worm. Normally I just a 5g cone weight near the weedless hook just to help the jelly worm sink with the bullet weight but in the photo below I’m using a savage gear dart hook. This isn’t necessary but I had some lying around. 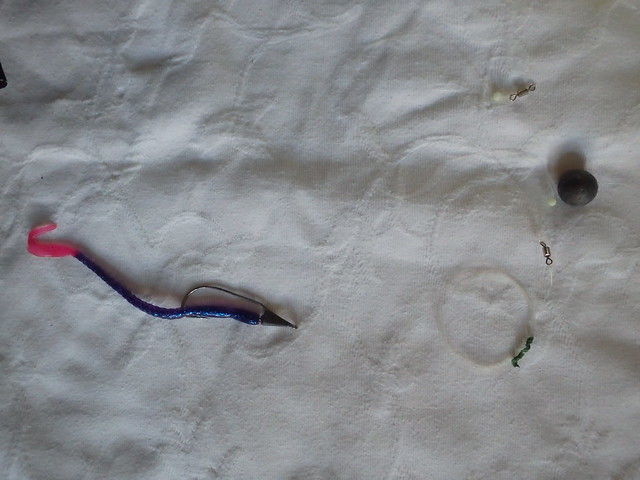 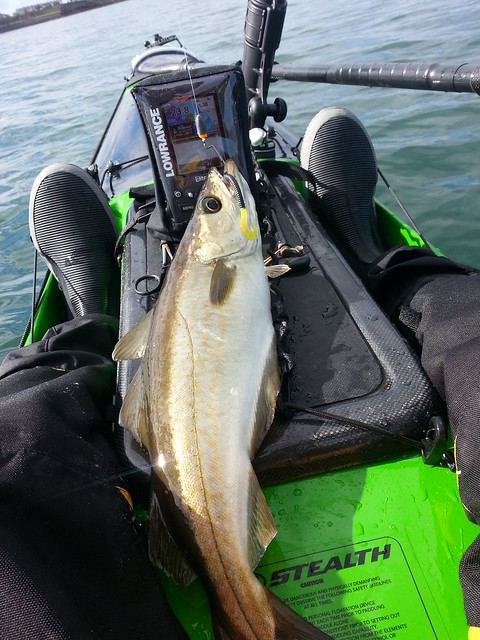 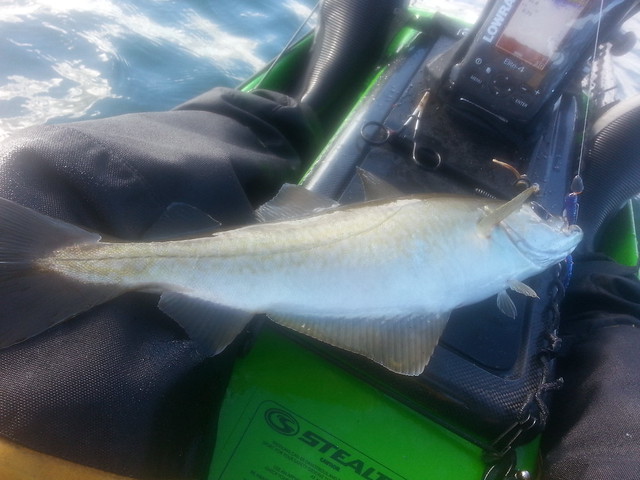 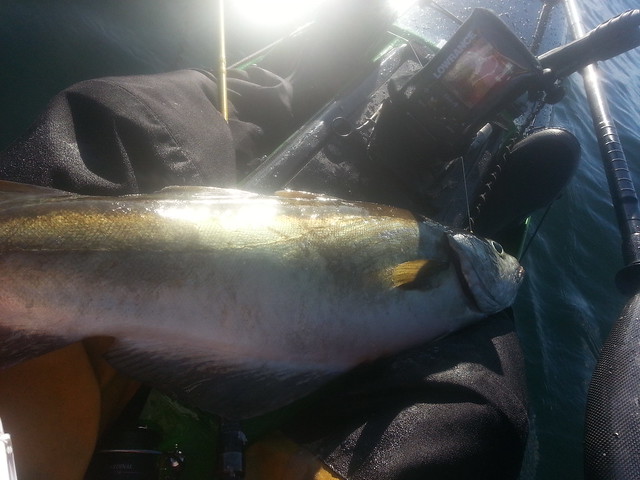 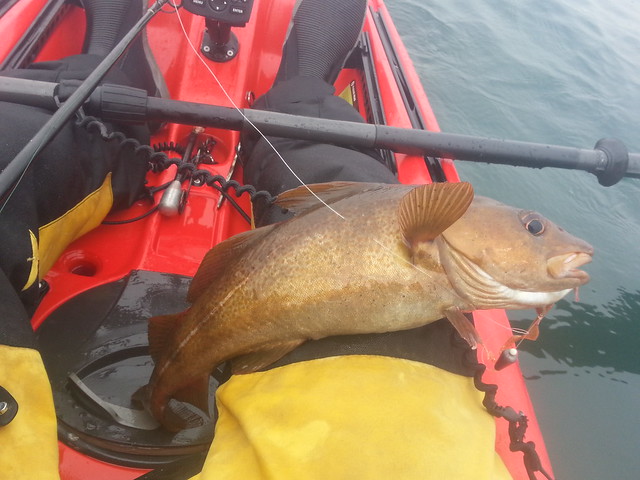 Weedless shads (Black Fiiish Minnow, Delande Swat Shads, Savage Gear Weedless Sandeel)
These are brilliant but not cheap. However, I’ve invested in quite a few different sizes and weights and really rate them. In addition, loses are small so whilst it is expensive up front you should have them a while. My favourite for waters less than 20ft is the Black Fiiish Minnow 120 (12g). For water between 20-30ft I switch to the 120 25g model. For deeper water the 140 40g works well as does the Delande Swat Shad 50g. The white version of the swat shad has been great for me when hunting the kelpie cod off the bottom. I’ve only just started using the Savage Gear Sandeels on weedless hooks so time will tell.

For Pollock in deeper waters I drop straight to the bottom and then fast retrieve to about 10ft below the kayak and then drop down again. I’ve had hits right up in the shallows which is a real rush so keep winding and don’t assume nothing is chasing it. In shallow waters I opt for a cast, sink and fast retrieve. I sweep the area whilst drifting to find the fish.

For cod, my method is really simple. I drop to the bottom and just bounce and twitch it so it goes approximately 1ft from the bottom and back down again. If there are cod there, it isn’t usually long before you get a tug followed by a nice bend in the rod 🙂

Below shows the mixture of lures I’ve been trying out: 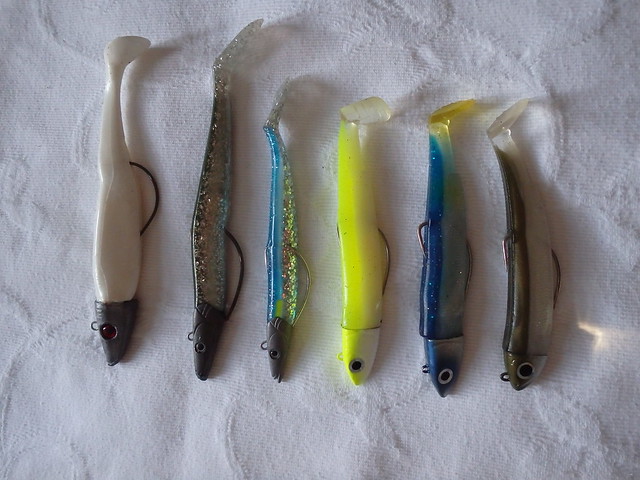 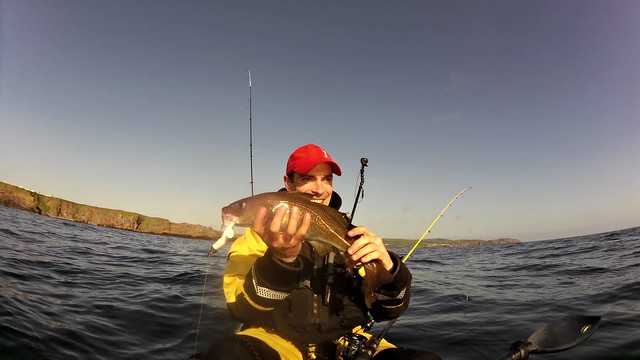 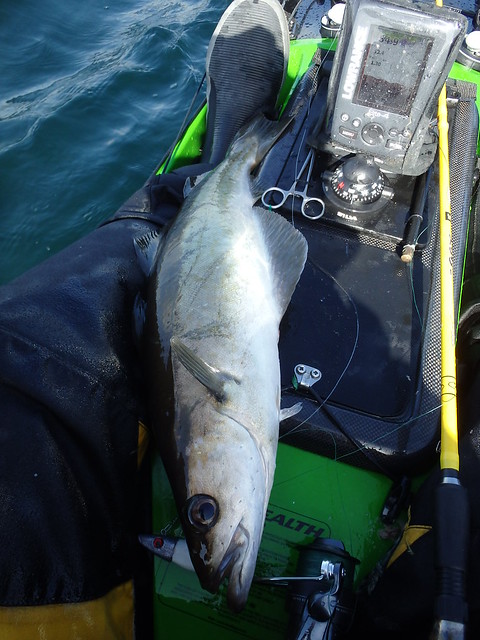 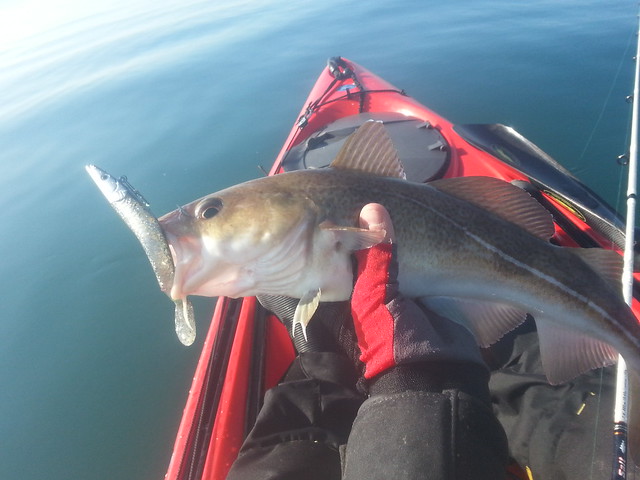 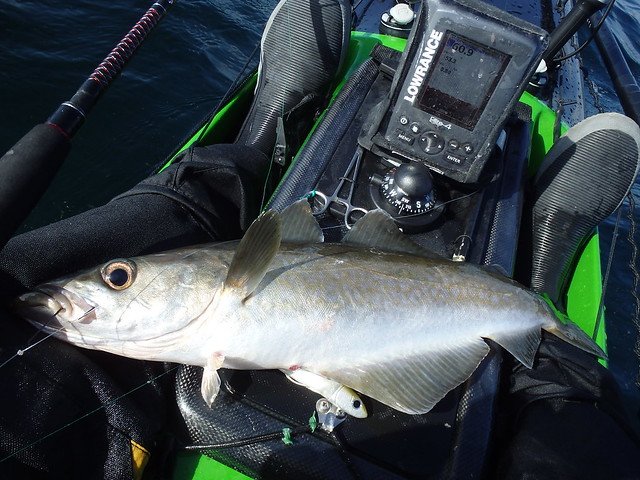 Greedy one this one: 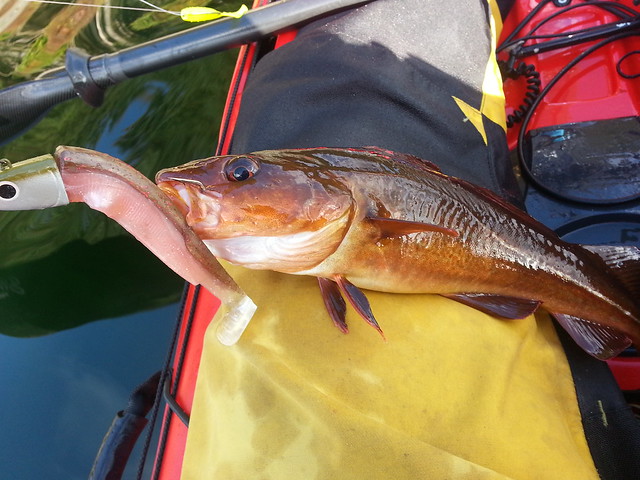 Drop Shot Jigging Cod Rig:
This is a relatively new rig which I’ve been experimenting with after reading about it here: http://seakayakfishing.blogspot.co.uk/2014/04/weedless-jigging-rigs-for-cod-and.html

In short, it works a treat. I’ve tried this on the last 3 kayak trips and I’m still using the same rig. I bought some 6oz in line weights from EBay and have plastic shad rigged weedlessly attached to the bottom ring with a split ring. About a foot above the in line weight I have a 4″ sandeel imitation rigged up using a drop shot knot. I use this for fishing waters deeper than 40ft and use the method as per the shads for cod (i.e. bouncing off the bottom with small twitches). I’ve yet to have a cod take the bottom shad but had a lot of hits on the sandeel. 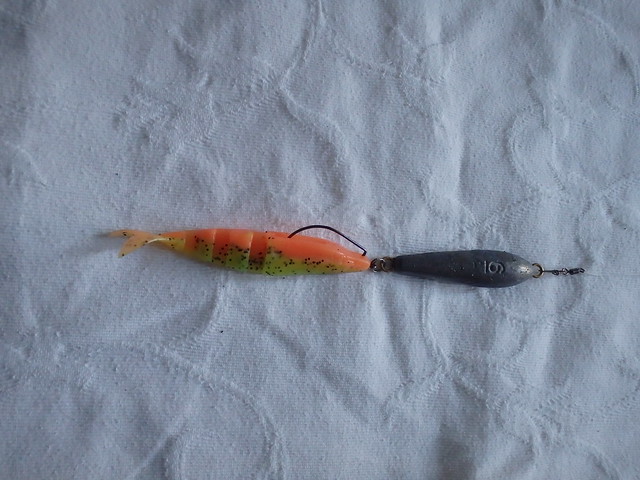 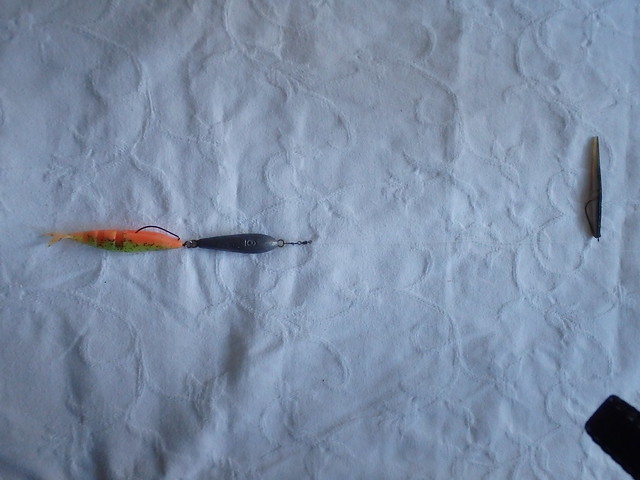 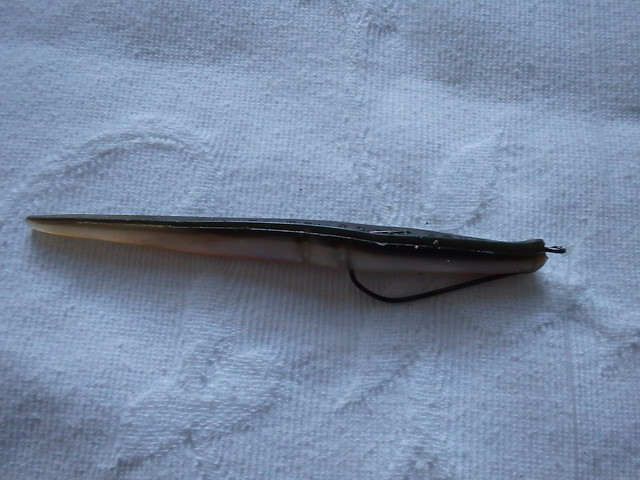 Rapala Weedless Shad 80 – The verdict is still out on these
I’ve just bought a couple of these to use on my light 8-25g lure rod. The finish on them is great. I’ve only had a couple of casts with them to date to observe their action and they have a great wobble. I’ll have to update you on how I get on with these. 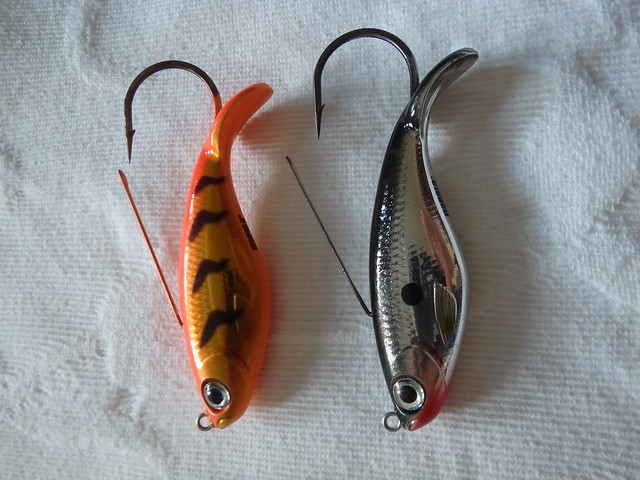 Well, there you have it. These are my rigs that I use throughout the summer when fishing for Pollock and Cod. I very rarely lose a rig giving me much more time to fish and they work. I’m really keen to hear what works for you or how my rigs can be improved further so please reply with any feedback.

2 thoughts on “Weedless rigs for Pollock and Cod – Kayak Fishing”